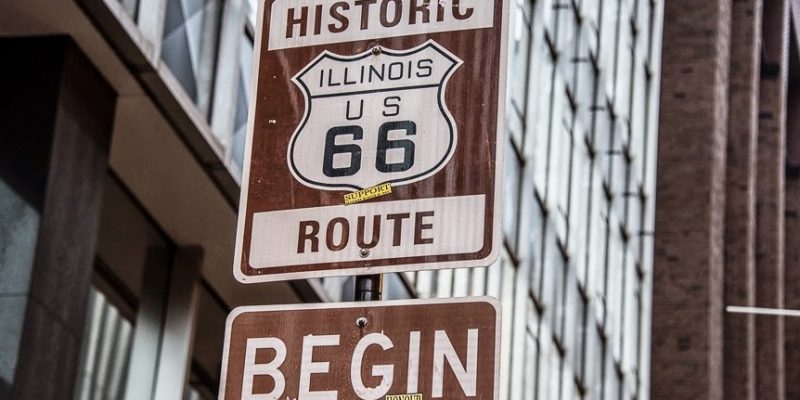 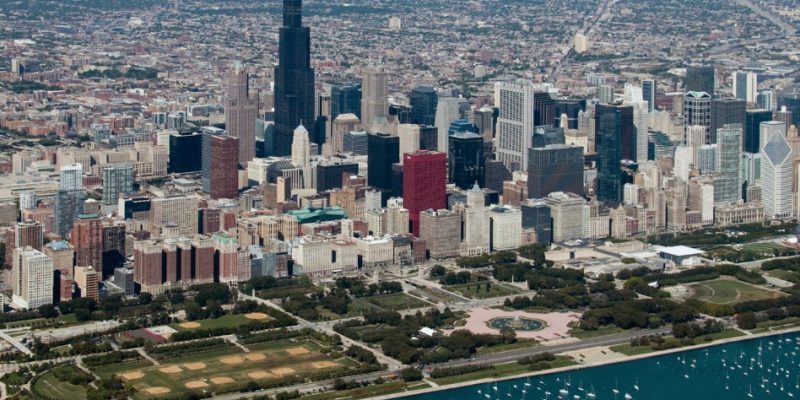 Route 66 tends to evoke images of open, western landscapes like Monument Valley, but the road is also urban. Nowhere is it more so than in Grant Park, downtown Chicago,

The start of Route 66 has moved a few times. Originally, Route 66 began on Jackson Blvd. at Michigan Ave. In 1933, the start (and end) was moved east onto the reclaimed land for the world fair to Jackson and Lake Shore Drive. In 1955, Jackson Blvd became one way west of Michigan Ave. and Adams St. became the westbound US-66. However the start of US-66 remained on Jackson at Lake Shore Drive. So, even while currently Adams Street at Michigan Avenue is marked as the starting point, Route 66 never departed from there.

Grant Park is a large urban park in the Loop community area of Chicago. Located in Chicago’s central business district, the park’s most notable features are Millennium Park, Buckingham Fountain, the Art Institute of Chicago and the Museum Campus

Route 66 tends to evoke images of open, western landscapes like Monument Valley, but the road is also urban.  Nowhere is it more so than in downtown Chicago, where the quintessential American corridor begins, or ends, depending on your perspective, at Grant Park.  At the intersection of Jackson and Michigan Avenues is the “End Historic Route 66” sign.  Many vintage icons from the Route 66 era have been lost, but not Grant Park, the historic road’s official eastern terminus.

Located in close proximity to Lake Michigan, Grant Park is one of the oldest parks in the city and had its beginnings in the 1830s, but the 1893 World Exposition was a catalyst for its historic significance.  Chicago spent $27 million hosting the landmark event.  Running from May to October of 1893, the fair covered 633 acres and attracted numbers equal to nearly half of the United States population.  The fair introduced several firsts, including Cracker Jacks, Aunt Jemima syrup, diet soda, and Pabst beer.  It also introduced the idea of making Grant Park a major civic and cultural landmark.

Pairing Grant Park with Route 66, the major east-west automobile artery, was a natural choice.  Before the advent of Route 66, the popular Pontiac Trail already connected Chicago to St. Louis.  In 1918, Illinois began paving the road. By the time Route 66 came along, the entire Pontiac Trail had pavement. By 1927, when Louis Armstrong and the accompanying King Oliver’s Creole Jazz Band, ushered in the Jazz Age in Chicago, Route 66 signs were visible all along the Illinois route.  Chicago sported numerous services to accommodate travelers, including its parkland gem, Grant Park.  The National Park Service acknowledged Grant Park’s significance in its 1993 National Register of Historic Places listing.